One of the longest-standing community groups in the Brown Bagging for Calgary’s Kids community is located at Crossroads Community Church. Facilitated by John Estabrooks, the BB4CK program at Crossroads began to take shape in the fall of 2008 and in January 2009 volunteers started preparing and delivering lunches to four schools in their neighborhood. In 2010 they added their fifth school and have supported these schools for the past seven years. 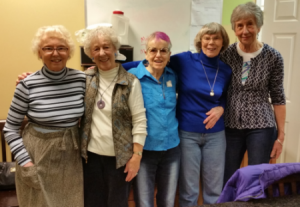 Currently, Crossroads creates lunches with the help of three different volunteer groups. “We have a Monday group, a Wednesday group, and I look after lunches on Friday, we just have one school that has Friday lunches,” shares Estabrooks. “From early on our Monday group came to be a group of retired ladies,” says Estabrooks, “we’ve had ladies from the community who attend the Ascension Lutheran church up the road and the ladies here from Crossroads. They have become their own little unit and look after Mondays.”

Gillian, Marge, Elsie, Jo, Peggy and Anne make up the dedicated Monday volunteer group. “Gillian does the organizing, she does the menu and shopping and all kinds of prep,” explains Estabrooks, “the organizing of who is going to eat what, that’s Gillian.” As a former lunch room supervisor, Gillian manages the kitchen and shopping with ease and preps lunch items for the Monday and Wednesday volunteer groups, “if you do the extra prep work it’s easier on the other volunteers, and I like to be organized” she says. 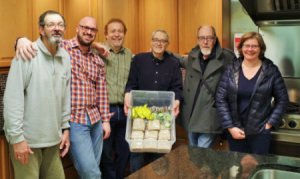 Gillian truly enjoys her work and the company of her fellow volunteers – “it gives me purpose” she explains, “it’s very rewarding.” The other volunteers echo Gillian’s statements, grateful for the opportunity to make a difference in the lives of children and for

the fun and friendship they experience with their group. Marge shares that “lunches are important; they give children the opportunity to learn better.” Her advice to potential community volunteers? “Give it a try, you’ll probably like it.”

The Wednesday group is made up of six volunteers: John, Larry, David, Richard, Linda and Roy. Their group is featured in the video below. Both groups are lively and joyful and passionate about making a difference in the lives of those in their community. “You meet needs, you help people as you can, you play together,” says Estabrooks, “it’s a neat thing and Brown Bagging is a pivotal part of that for us.”