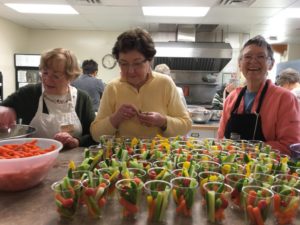 Marlin set up the lunch program in 2015 alongside collaborator Diane Mather, with advice from public health nurse Carol Tomiyama and ongoing consultation with Brown Bagging for Calgary’s Kids. The program has volunteer support from the Acadian Networking Group, as well as some financial support from the Calgary Co-op Community Foundation and Save-On Foods.

The Acadia community group’s original goal was to provide lunches four days a week to students at Acadia School, an elementary school, and David Thompson School, a middle school.

Today, the group provides meals and snacks three days a week to three schools, Acadia School, David Thompson School and Foundations for the Future Charter Academy. A group from the Lutheran Church of Our Saviour, a member of the Acadian Networking Group, creates lunches on the fourth day.

Marlin knew every child at the schools would not need a lunch, but she was surprised by how many students needed a little extra food. “A lot of kids come with something, but it’s nowhere near enough to last the full day,” Marlin says. In response, her community group has focused less on sandwiches and more on “grab and gobble” items like cheese and crackers, vegetarian meatballs, fruit and veggie cups and hard-boiled eggs. Because Marlin’s group is providing top-up food, it is now able to help feed 300 students at each school—twice as many as Marlin’s group originally expected.

Lesson learned: When it comes to providing nutrition to students with different needs (and at different growth-spurt stages), snack-sized items are key.

Marlin belongs to McDougall United Church, which is part of the Acadian Networking Group. Her community group recently received a United Church Conference Grant, which is a one-time-only grant for neighbourhood-based initiatives. “The lunch program fit the criteria perfectly,” Marlin says. The grant supports lunch program costs as well as two other McDougall United Church programs: an edible gardening program and the church’s existing community meals program. The Acadian Networking Group received a grant from the Calgary Co-op Community Foundation. This funding bought supplies for a baking day Marlin’s group held recently. The volunteers worked with David Thompson ME to WE leadership program students to bake cookies, muffins and granola. “We probably have enough baking now to last us until the end of the school year,” Marlin says. 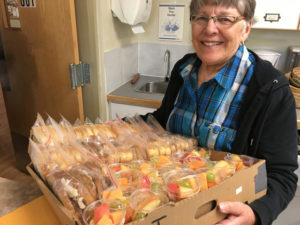 Lesson learned: If you investigate and explore different opportunities you can discover various types of funding to support your group.

During the school year, Marlin discovered that some students didn’t need lunch—but they did need breakfast. The volunteers came up with an instant oatmeal mix packed with protein-rich extras like dried fruit, oats, lentil flour and skim milk powder. The packs are stored in the offices at Acadia School, David Thompson School and Foundations for the Future Charter Academy, and students access the packs as needed, “It’s delicious,” Marlin says. “Especially the one with the dried cherries and the chocolate chips.”

Lesson learned: When you’re creative and flexible, you can meet the changing needs of your community.

What do the kids think?

Marlin says her group had a letter from a student thanking them for the lunches, which the student said kept her and her family supported during a time of financial instability. The children involved with meal-making through the ME to WE leadership program made individual cards for each volunteer they worked with. Feedback like this that comes directly from students is tremendously motivating for the volunteers. Once, when volunteers were delivering food to David Thompson School, a boy came over and said “Are you the ladies from the church who bring the food? Thank you. They’re excellent lunches.”

Find out how to get involved with a community group or learn how to create your own here.