In 2002, Christy Switzer chose to work with a small organization called Brown Bagging for Calgary’s Street Kids for her university practicum. This choice set Christy on a new adventure and helped shape BB4CK into the organization it is today. “The simplicity of it was, there are kids who are hungry and we are going to feed them. I liked that. You could do so much with that. I got involved initially in the practicum and just kind of never left,” says Christy. 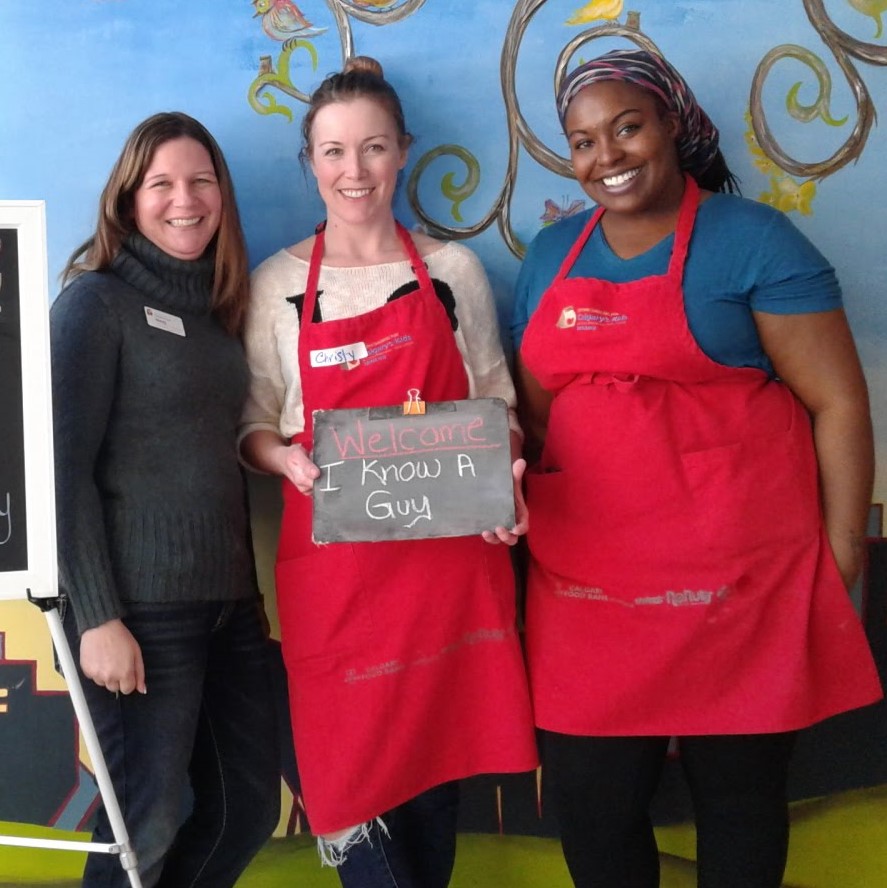 Christy Switzer with Wendy and Nikita

At that time, Brown Bagging was small; it was operating out of the downtown kitchen creating lunches for partner organizations, like CUPS and Alpha House, supporting hungry youth living on the street. In 2005, Bob McInnis came on as the new Executive Director, and the organization started learning more about hungry students needing help in Calgary schools.

“Our mission was to feed kids that were hungry, and they were hungry in schools,” says Christy. “Schools were doing the best they could but there were no breakfast clubs, snack programs, really no other supports, so we took that on as our mission to get into schools.” That year, Brown Bagging for Calgary’s Street Kids removed street from its name and started working with Calgary schools. “When we got into schools, we grew as quickly as possible and were doing over 1,000 lunches each day within the first year or so of starting the school program.”

“One story I remember is about a child who didn’t know what a pineapple was, had never eaten a pineapple and she tried it, loved it, and wanted more and wanted to know how to spell the word, it was this big thing for her. Through the modelling of what a good lunch looked like, and from removing the weight from the family of needing to provide lunches five days a week, they started seeing healthy lunches coming two days a week from the child’s family. This school learned that the parents had the desire to send good lunches, but they wouldn’t be full, or sometimes they’d be makeshift leftovers or fast food. Once the school started providing veggies sticks, sandwiches, and fruit, home started providing sandwiches, veggie sticks and fruit.” Christy continues, “Schools would tell us that parents would call asking if there’d be lunches at school this week and they’d say yes, every week, whenever you need, and the parent would say “great, thank you, then we can have dinners.” More often than not, parents are doing the best they can and if the kids are not eating, the adult at home has not eaten for days. They are so hungry and so tired and in that positon, how do you cope?”

“I started at Brown Bagging when I was 22. My first 6 years with Brown Bagging were spent on the board, and my last 4 years were spent on staff. It was formative, it taught me If you put your hand up and are willing to do the work you don’t have to be the smartest person in the room or have all the answers. If you put your hand up you get to go do the thing. It showed me what is possible, what can happen when you are the person who raises your hand when there is work to be done,” says Christy.

Today, Christy’s company, I Know A Guy Renovations, donates 100 lunches on behalf of every renovation they do. Their team volunteers in the kitchen often, and Christy shares that “it’s so amazing to bring our trades in and expose people to something they’ve maybe not had the chance to see before. Brown Bagging is my charity of choice forever. I love it so much. I encourage other business owners to pick two or three causes that really resonate with you, go somewhere, and do something where you can see the impact and become involved in something. Get to know the organization, how it is growing and the cause. Get involved.”