Meet Vu, one of our wonderful volunteer delivery drivers! After learning about Brown Bagging for Calgary’s Kids at a charity event he was supporting, Vu decided to do a little research to learn more about BB4CK. “I was immediately drawn in by the morals and values that BB4CK stands behind. When I was growing up, my family wasn’t financially well-off. However, my mom did whatever she could to support her three kids to ensure that we were fed. Often, I would take whatever lunch that I had, and share it with or give it to classmates that didn’t have lunch,” says Vu. “Even though it saddens me that, 20 years later, there are still children that go hungry, I am happy and encouraged that an organization like BB4CK exists to bring large scale awareness to this issue. I am a firm believer that children are the future. Cliché, yes, but that’s what I passionately believe. Without proper nourishment, even the brightest of children are dulled. When I volunteer with BB4CK, I believe that I am not just delivering nourishment, but an opportunity.”

Vu has been delivering lunches since November of 2017. In addition to volunteering with BB4CK, Vu has engaged his own community to join in feeding hungry kids. The team from Vu’s company, EvolutionVN has volunteered in the BB4CK kitchen, making and packing lunches, and Vu helped raise awareness and funds to feed kids through a great charity fitness event in April of this year. 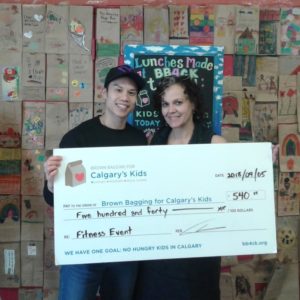 “The charity fitness event I organized featured multiple trainers, local food vendors, and lululemon, with proceeds going to BB4CK. Beyond the money raised, it was very important to have BB4CK there to share the real and unfortunate statistics related to kids who are in need of this service. I actively talk about BB4CK with my friends, family, and peers, encouraging them to get involved at any capacity.  As my company broadens its reach, I would love to have a forum to teach and provide exercise/fitness education to kids. Healthy habits are instilled and developed at a young age. I believe that for complete and rounded development, in addition to nourishment, physical activity is an integral piece.”

What was your favorite lunch as a child? “Still, to this day, I love peanut butter sandwiches. Probably because I ate so many of them as a child!”