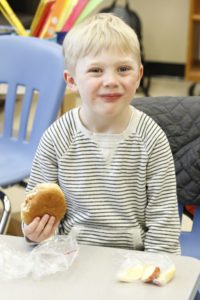 “I have worked with the Calgary Board of Education for 37 years.

It is only since Brown Bagging for Calgary’s Kids began that I have witnessed the amazing change in students of all ages from a simple thing like a sandwich and a snack.

There have been students hiding at lunch so nobody sees they don’t have any food; students not attend school because they have no food for snack or lunch; students (many) who steal food from other students’ backpacks when they are pretending to go to the washroom (comes down to basic survival); students who have taken food off of teacher’s desks; many students who go home knowing they will not have anything to eat until they come back to school the next day; the list could go on and on.

I had a family that the kids had to take turns eating…whoever got a lunch did not get supper, then the next day it was the other child’s turn to have lunch, but not supper, because he had supper the day before. It is so heartbreaking to actually be with these kids, see their tears, and you try to do anything you can to change their life.

On the other side of the coin… I have had mothers come to me so thankful for feeding their children (I always tell them the story of Brown Bagging and the volunteers). I would tell them that one day they would be able to help someone in need, all they have to do is pay it forward when they were able to.  They always responded that they definitely would. A lunch changes more than a hungry tummy. I have seen such changes; previous students become the mothers of present students and they always comment on what a difference the lunches made to them and how the lunches made them feel. Many have told me they donate to the food banks because they were looked after when they were hungry.  I would suggest they donate to Brown Bagging as well. This is one way we change society for the better.

Once we were able to look after their basic need of food, we began to see the change that it made in these children. The stealing stopped; the students started coming to school regularly; students who would hide and not speak to anyone transformed into well-adjusted students that socialized with other students, talked to the adults in the building, and began learning!! Teachers could not believe the difference they saw in the classroom.

Food is one of our basic needs of life and without it, there is no learning, no socialization, and it affects the confidence of students because they feel they do not fit in – they see all the other children at lunch, happy, sitting with their friends and excited about what they have in their lunch kit.  A student without any food would never put themselves in a position to be in the lunchroom around those happy students eating lunches.

Brown Bagging for Calgary’s Kids, the volunteers, and most of all the people who make it possible for Brown Bagging to exist are all unsung heroes!  You have no idea what a difference a little lunch makes to a hungry tummy. Like I said, food is such a basic need and children going to school hungry but expected to learn is a tragedy.”  – N.E. Calgary School Administrator